A Conversation between Nicola Lauré al-Samarai and Peggy Piesche. With paintings by Thenjiwe Niki Nkosi

This is the third and last part of a longer conversation between Nicola Lauré al-Samarai and Peggy Piesche. By discussing Black Studies in Germany and the US, the consumption of Blackness and the reproduction of exclusionary settings, they aim at opening up a critical transnational debate on forging strategies to create im-pertinent epistemologies and inter/personal politics of doing, both inside and beyond academia. The first and the second parts were published over the last weeks on transversal.at.

WHERE THERE IS A VOID, THERE IS SPACE: NEGOTIATING CONTESTED BLACK TERRAINS 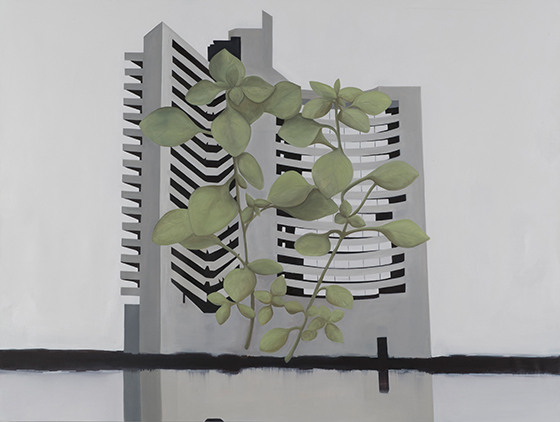 Thenjiwe Niki Nkosi, In Plain Sight (After the Tripode), 2013 (oil on canvas)

PP: Given the somewhat frustrating ‘realms of impossibilities’ in academia, it might be helpful to remember a quote of late Audre Lorde: ‘Sometimes we are blessed with being able to choose the time, and the arena, and the manner of our revolution, but more usually we must do battle where we are standing.’[1] It is within this empowering notional context that I suggest to locate our battle for agency. If we take a closer look at how many activist-scholars – Black and of Colour, in Germany and elsewhere – understand their work, their ‘sense of self-hood’ (Eigen-Sinn) is expressed and, more importantly, carried into effect by an unwillingness to separate form and tone from content, to isolate past(s) from present(s) and future(s) and to devalue the plurality of affective knowledge(s). Corresponding choices to take dis-ordering decisions and to perform transgressive acts bring to the fore an existential site of resistance. At the domineering edges between being overlooked and being put in a category, ‘silence’ can signify an active refusal to speak, ‘absence’ can signify an active refusal to take part, and a ‘void’ can signify an active refusal to hand over space.

The refusal to draw from or to contribute to hegemonic modes of knowledge production manifests itself in manifold ways and is not only a valid intellectual intervention but highly consequential to everybody’s work. The assumed ‘silence’ of a self-authorised collective subject contains both critique and crisis and oftentimes enters the terrain of normative research as a ‘void’. Residing at the erratic realm of the subversive and flaring up as a paradoxical performance, workings of the void – passed on by citation and referential transformation – give evidence of feats of resistance and creative ruptures from within. Since the effects of politics of knowledge (production) and meaning (making) are nowhere so hauntingly present as in the left-out traces of the lived experience of the Other, attempts to detect and decipher the corresponding voids need a hermeneutic framework that can relate these voids and their workings to specific yet highly ambiguous diasporic positionalities.[2]

This brings me back to the problems of our field in question. Empirical research with/in an arguably small pool of respondents often lives from human networks scholars are able to built. In recent years it has become increasingly evident, however, that those human networks are not necessarily capable of locating and deciphering the collective experience ‘behind the void’ because they are not part of it. There the issue of responsibility comes into play. With particular respect to those of us who take an active part in shaping the field of Black German Studies with interdiasporic Black approaches, such a responsibility goes far beyond questioning notional adaptabilities and/or criticising national or diasporic lenses. It rather challenges us to reconsider and, even more, to reframe our positionalities as Black scholars / scholars of Colour in the academia because our respective ‘placing’ is subjected to powerfully intertwined structural conditions and because, in both Germany and the U.S., restrictions of access and entry prevent us from fully participating in determining the spaces and references, modes and protocols of a knowledge production about ‘us’.

I therefore believe that ‘we’ – if we do consider ourselves an interdiasporic activist-scholarly community – are called upon to open and to facilitate spaces for engagement, exchange and debate; spaces that support ethical scholarship as a collectivist endeavour. Figuring out how to continue to move in the direction of making academia one such space is certainly very difficult and requires a lot of work but it is well worth the effort. After all, it is we who are defined also by our shared differences, as Audre Lorde emphasised almost three decades ago.

N.L.al-S.: As much as I appreciate your insightful thoughts, I am somewhat reluctant to envision academia as a desirable ‘possibility space’ (Möglichkeitsraum). I absolutely agree that a participatory development of transnational self-/reflexive structures would certainly help to democratise the field in question, but in view of the various systemic inextricabilities, it is rather doubtful whether there are many options for us to encourage or to keep alive vital transformation and sustainable change. Unfortunately though, it is also impossible to conceptualise critical scholarship without considering academia. Even as a freelancer, I am not released from my ‘academic’ responsibility because I can neither situate myself and my work entirely outside the institution nor can I avoid a powerful societal environment or its efforts to digest ‘im-pertinent’ (un-gehörig) epistemologies and inter/personal politics of doing. Within a dominant context that administers ‘Blackness’ and other ‘race matters’ by invigorating the exploitative logics of neo-liberalism and that legitimises itself by orchestrating a violently selective sense of what is considered ‘history’ and ‘knowledge’, assumptions of independence are fallacious.

Angela Davis has pointed to the intrinsic difficulties we are confronted with in a society that, in her words, ‘encourages historical amnesia’ and thus hinders us to ‘contemporise’ our collective experience.[3] She reminds us that hegemonic politics of dismembering keep leaving a deep imprint on marginalised communities because they directly impair processes of memory-building and injure constructions of memory both retrospectively and prospectively. That, for me, is a major reason why critical attempts to contemporise the multiplicity of our existences should be fundamentally based on what you have described as ‘active refusal’. I really like this concept! As a theory of practice, it demands a radical sense of inter-communal plurality, and as a practice of theory, it challenges us to be aware of, to draw from, to refer to and to distribute knowledge/s that are originated in and shaped by the situational potentiality of repudiation and are thus deeply historical. These knowledge/s, fragile and fragmentary, contain the countless expressions of the experience behind the ‘void’, while the ‘void’ and its ‘workings’ re-member corresponding agencies of refusal. If we want to transform these agencies into shareable references, we need to think about collectivist ‘processes-of-bringing-into-relation’[4] the knowledge-abilities of Black subjectivities that are pulsating underneath.

Discussing her artistic practice and working context in a collaborative-collectivist project, entitled Multiplier, South African artist Thenjiwe Niki Nkosi introduces a concept she calls radical sharing.[5] As opposed to a conventional meaning of sharing, that can bear also the connotation of ‘carving up a whole into smaller parts to be parceled out’, radical sharing, in her words, ‘always has inclusivity as one of its aims. [It] privileges the power of human interaction, of creating community, of deep listening, of sharing ownership, of really seeing one another.’[6] Already her very terminological considerations convey a collective stance. Instead of using the rather technical and seemingly impersonal term ‘knowledge production’, Nkosi activates composite expressions. With words like ‘knowledge generation, knowledge creation, knowledge sharing, knowledge remembering’[7] she not only renders precise the plurality of inter-active becomings of knowledge itself but deliberately opens the field ‘to include more ways of knowing, of expressing that knowing, of documenting and sharing that knowing. And, ultimately, of equalising the values of various types of knowledge’.[8]

This, to me, is a visionary possibility-space! It allows us to re-direct our efforts and energies from a site of constant battle to a relational site of process and speech. Many of the concepts we have been discussing in this conversation, I would consider ‘futuristic’ in the sense Thenjiwe Niki Nkosi suggests: ‘It has to do with the types of strategies that people invent. Particularly people who are navigating an exclusionary and perhaps hostile present, who find ways of surviving – and thriving – that run counter to the established models. Through their work and other actions they are imagining and creating worlds for themselves now that do not yet exist’.[9]

PP: What Thenjiwe Niki Nkosi refers to as ‘futuristic’ should not be mistaken with conventional notions of ‘future’ since it neither points to a ‘time’ to come nor does it indicate a linear, merely ‘temporal’ process. It rather provides us with a critical category to re/cognise (an/erkennen) the many keepings of a radical sense of contemporariness, fundamentally necessary to the life-worlds and life-realities she so adequately describes. I really believe that we are in the midst of creating ‘im-pertinent’ (un-gehörig) epistemologies and inter/personal politics of doing’, to use your felicitous phrase. As you know, I am a hopeless optimist – by no alternatives, one could argue – which is why I am convinced that the doings of our collectivist work envision a world beyond the present and imagine another world possible. There is something highly political about the creative imaginations Thenjiwe talks about. Through our work, through conversations like the one we’ve just had, these imaginations are put in transit/ion; as agents of/in space and time that keep the world in motion. It is the empowering realm of imaginativeness – its fictions, aesthetics and ethics – to inspire those who are working to create future. At the end of the day, the most radical thing still seems to be to imagine that we do have a future at all.

[2] White scholars are oftentimes not aware of how ‘Black refusal’ translates itself into their work. In Germany, the countless examples range from a politics of publishing power resulting, for instance, in the ‘shared’ editorship of the first publication on Black German Women or the well-established misapprehensions of early organisational contexts of the Black German movement and their respective legacies up to current misconceptions regarding a collective memory building that have distorted a mutually inspirational, collaborative bond between African American, queer/feminist poet, scholar and activist Audre Lorde and Black German feminists into a mono-directional ‘founding myth’.

[3] Angela Davis, interviewed by James Boyd, ‘Explorations in Black Leadership Series’, University of Virginia, July 2009. The interview is accessible at https://www.youtube.com/watch?v=roXCuwrELHM; for the interview transcript see http://www.virginia.edu/publichistory/bl/index.php?fulltranscript&uid=45 (last access to both websites: October 19, 2016).

[4] Glissant, Poetics of Relation, op cit, p 95. For Glissant, ‘relation’ is an open totality of movement; ‘it is the boundless effort of the world: to become realized in its totality, that is, to evade rest.’ Ibid, pp 171-72.