In May of 1743, a vessel from Corfu carrying bodies of dead crew members who had died of a mysterious disease arrived in Messina.  The ship and cargo were burned, but cases of a strange new disease were soon thereafter observed in the hospital and in the poorest parts of the town; and in the summer, a frightening plague epidemic developed, killing forty to fifty thousand people, and then disappeared before spreading to other parts of Sicily. Rousseau was traveling from Paris to Venice and was forced to halt in Genoa because of the epidemic. He narrates his quarantine in the Confessions (1782):

"It was at the time of the plague at Messina, and the English fleet had anchored there, and visited the Felucca, on board of which I was, and this circumstance subjected us, on our arrival, after a long and difficult voyage, to a quarantine of one-and-twenty days.

The passengers had the choice of performing it on board or in the Lazaretto, which we were told was not yet furnished. They all chose the Felucca. The insupportable heat, the closeness of the vessel, the impossibility of walking in it, and the vermin with which it swarmed, made me at all risks prefer the Lazaretto. I was therefore conducted to a large building of two stories, quite empty, in which I found neither window, bed, table, nor chair, not so much as even a joint-stool or bundle of straw. My night sack and my two trunks being brought me, I was shut in by great doors with huge locks, and remained at full liberty to walk at my ease from chamber to chamber and story to story, everywhere finding the same solitude and nakedness.

This, however, did not induce me to repent that I had preferred the Lazaretto to the Felucca; and, like another Robinson Crusoe, I began to arrange myself for my one-and twenty days, just as I should have done for my whole life. In the first place, I had the amusement of destroying the vermin I had caught in the Felucca. As soon as I had got clear of these, by means of changing my clothes and linen, I proceeded to furnish the chamber I had chosen. I made a good mattress with my waistcoats and shirts; my napkins I converted, by sewing them together, into sheets; my robe de chambre into a counterpane; and my cloak into a pillow. I made myself a seat with one of my trunks laid flat, and a table with the other. I took out some writing paper and an inkstand, and distributed, in the manner of a library, a dozen books which I had with me. In a word, I so well arranged my few movables, that except curtains and windows, I was almost as commodiously lodged in this Lazeretto, absolutely empty as it was, as I had been at the Tennis Court in the Rue Verdelet. My dinners were served with no small degree of pomp; they were escorted by two grenadiers with bayonets fixed; the staircase was my dining-room, the landing-place my table, and the steps served me for a seat; and as soon as my dinner was served up a little bell was rung to inform me I might sit down to table.

Between my repasts, when I did not either read or write or work at the furnishing of my apartment, I went to walk in the burying-ground of the Protestants, which served me as a courtyard. From this place I ascended to a lanthorn which looked into the harbor, and from which I could see the ships come in and go out. In this manner I passed fourteen days."[1]

Being told like the rest of humanity to “stay at home” because of the pandemic, I immediately remembered this passage from the Confessions. While all of his companions of misfortune chose to stay confined together on a boat, Rousseau decided to be locked up in the lazaretto instead. A lazaretto is a hospital for those affected with contagious diseases. A felucca, or Mediterranean sailing ship, could also be set apart for quarantine purposes. Obviously, the two possibilities were offered to travelers in Genoa, and Rousseau thought he had better leave the boat and stay on his own in the building. 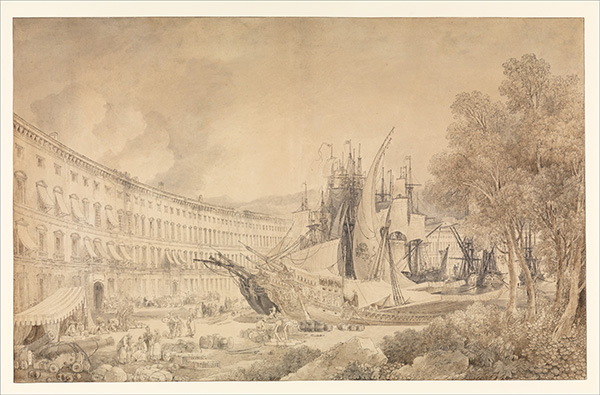 One can read this episode by solely focusing on the idea of choice: What is best in a time of confinement? Be quarantined with other people? Or be quarantined alone ? I must say that I spent some time wondering about such an alternative. If I had had the choice between the two options, what would have I done? (I am on my own, by the way, sheltered in quasi total isolation in Irvine, California.)

There is something else perhaps more profound in this passage, which is that quarantine is only tolerable if you quarantine from it—if you quarantine within the quarantine and from it at the same time, so to speak. The lazaretto represents this redoubled quarantine that expresses Rousseau’s need to isolate from collective isolation, to create an island (insula) within isolation. Such is perhaps the most difficult challenge in a lockdown situation: to clear a space where to be on one’s own while already separated from the community. Being cooped up on a boat with a few others of course generates a feeling of estrangement, but estrangement is not solitude, and solitude is, in reality, what makes confinement bearable. And this is true even if one is already on one’s own. I noticed that what made my isolation extremely distressing was in fact my incapacity to withdraw into myself. To find this insular point where I could be my self (in two words). I am not talking here of authenticity, simply of this radical nakedness of the soul that allows to build a dwelling in one’s house, to make the house habitable by locating the psychic space where it is possible to do something, that is, in my case, write. I noticed that writing only became possible when I reached such a confinement within confinement, a place in the place where nobody could enter and that at the same time was the condition for my exchanges with others. When I was able to get immersed in writing, conversations through Skype, for example, became something else. They were dialogues, not veiled monologues. Writing became possible when solitude started to protect me from isolation. One has to undress from all the coverings, clothes, curtains, masks, and meaningless chattering that still stick to one’s being when one is severed from others. Social distance is never powerful enough to strip one from what remains of the social in the distance. Sheltered-in-place has to be a radical Robinson Crusoe experience, an experience that allows one to construct a home out of nothing. To start anew. Or to remember. 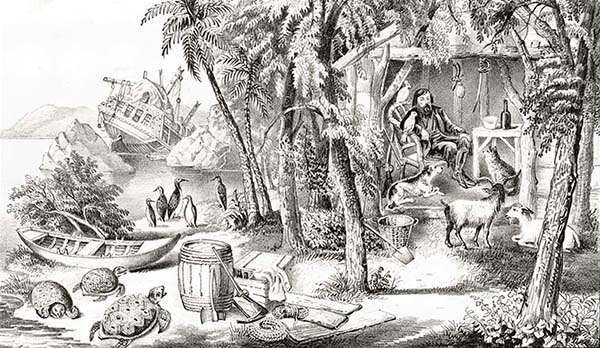 I wonder if Foucault, at the end of his life, did not turn to the ethics of the self—care of the self, technologies of the self, government of the self—out of the same necessity. The urge to carve out a space for himself within the social isolation that AIDS insidiously was threatening him with. Perhaps Foucault was looking for his island, his absolute (ab-solutus) land where he would have found the courage of speaking and writing before he died. Those who have seen in his late seminars a nihilistic individualist withdrawal from politics have totally missed the point.

We know that Karl Marx made fun of eighteenth-century robinsonades like Rousseau’s. Marx said that the origin of the social can by no means be a state of nature where isolated men finally come to meet and form a community. Solitude cannot be the origin of society.

This may be true, but I think it is necessary to know how to find society within oneself in order to understand what politics means. I admire those who are able to analyze the current crisis caused by the covid-19 pandemic in terms of global politics, capitalism, the state of exception, ecological crisis, China-Us-Russia strategic relationships, etc. Personally, at the moment, I am on the contrary trying to be an “individual.” This, once again, is not out of any individualism but because I think on the contrary that an epochè, a suspension, a bracketing of sociality, is sometimes the only access to alterity, a way to feel close to all the isolated people on Earth. Such is the reason why I am trying to be as solitary as possible in my loneliness. Such is the reason why I would also have chosen the lazaretto.