Our ruins are not for you!

Solidarity with the Golden Pudel Club and Park Fiction in Hamburg

Late Saturday night, the Golden Pudel Club stood in flames. The roof structure is destroyed. The improvisational shelter of a homeless refugee burned as well, including his papers. The Park Fiction Archive housed on the building’s top floor is drenched in extinguishing water.

The act (there were over one hundred guests in the club) as well as the timing (just a few weeks before the foreclosure, two days after the Pudel announced its plan to convert the club into a foundation) – both raise questions. Idiocy? Calculation?

This would not be the first attempt to drive away St. Pauli and users who stand in way of investments with fire. Should anyone mean to profit from the situation: be warned, moneybags!

This bone is too big for you.

We will allow for nothing other than:

1. the original Pudel, right where it is,

2. a permanent assurance that the building and property will remain noncommercial,

3. up top, an active space for daily activities, for the neighborhood, for unintelligible art, for Pudel booking, discussions, the Park Fiction Archive, Right to the City matters and subcultures. Just to name a few examples.

For this is how the place was always planned to be – a whole arrangement made of Park and Pudel. We have been fighting for it since 1995. And we will do so again. The burned-down doghouse is surrounded by ruined gastronomic ambitions geared towards high-paying clientele. They all failed. For you, it would be even worse.

And then this: It is a drama that our neighbor Kofi is threatened by deportation. He now lives in a burned tent in the park, he came forward after the fire as witness. On the very next day he was put in jail, and should be deported. This is a scandal. And it sheds doubt on the basic efficacy of police investigations.

In Hamburg a man once ran for 10 meters with no head. The Pudel, too, lives with no roof. It has always been held together by love for music, crude humor, dancing feet, uninformative posters and bar-counter philosophy. Poodles are not only funny and beautiful, they can also bite. 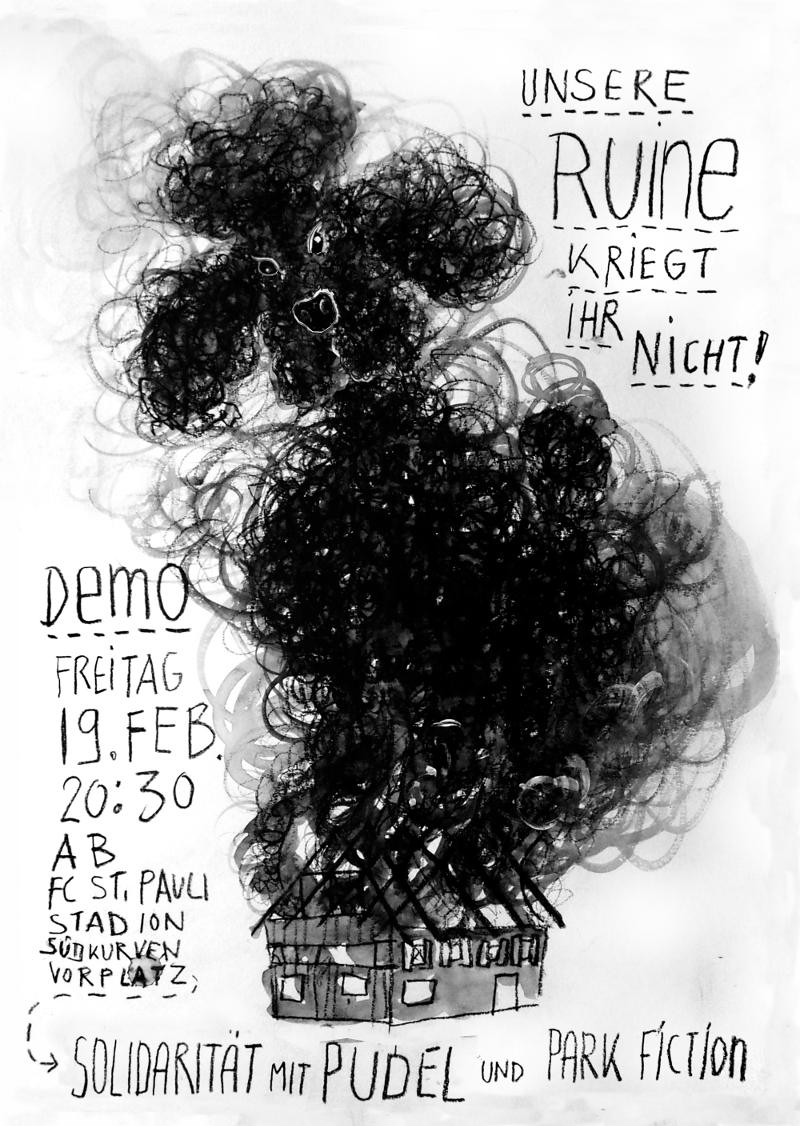 Supported by the Park Fiction Committee, Ultrà St. Pauli, Zeckensalon and other neighbors, fan groups of the FC St. Pauli and cultural and neighborhood initiatives.