Criminalization of climate activists and cultural producers in the Czech Republic

This is my statement that has been published in Czech translation on social media as part of the defense campaign:

In times of climate breakdown, when the Amazonas is on fire and Venice under water, when the Arctic ice is melting and ecosystems collapsing, the ongoing extraction from the Earth of coal and gas must be seen for what it is: a crime against humanity. The blockading of coal mines and other fossil infrastructure is therefore an entirely legitimate form of self-defense: an attempt to protect humanity, ecosystems and all forms of life on planet from even greater damage.
Whatever particular reasons led people to join the blockade, they are sure to have been good reasons. Speaking personally, my reason is that as an artist and film-maker I have followed the climate justice movement for the last couple of years, documenting the ever-evolving forms of mass civil disobedience and amplifying the voices of climate activists in films and other artworks. To be among such committed people is constantly inspiring. I hope my work can help at least in some small way to share these shining moments of climate action with people who are not yet part of it.
My involvement in the blockade of the Bílina coal mine in 2018 resulted in the film “Everything's coming together while everything's falling apart: Limity jsme my” (4K, 10 min., 2019), which is the fifth film in a cycle of films on climate action.
It can be watched in exhibitions, biennials and screenings, or through following this link: https://vimeo.com/293150164 (password: Northern Bohemia) 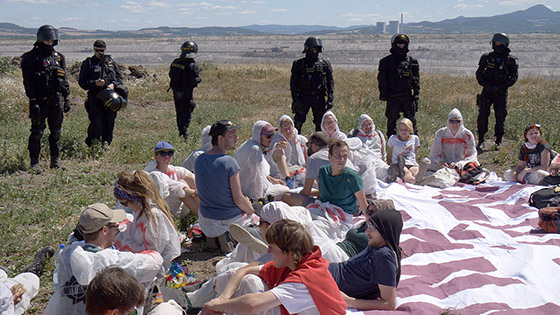