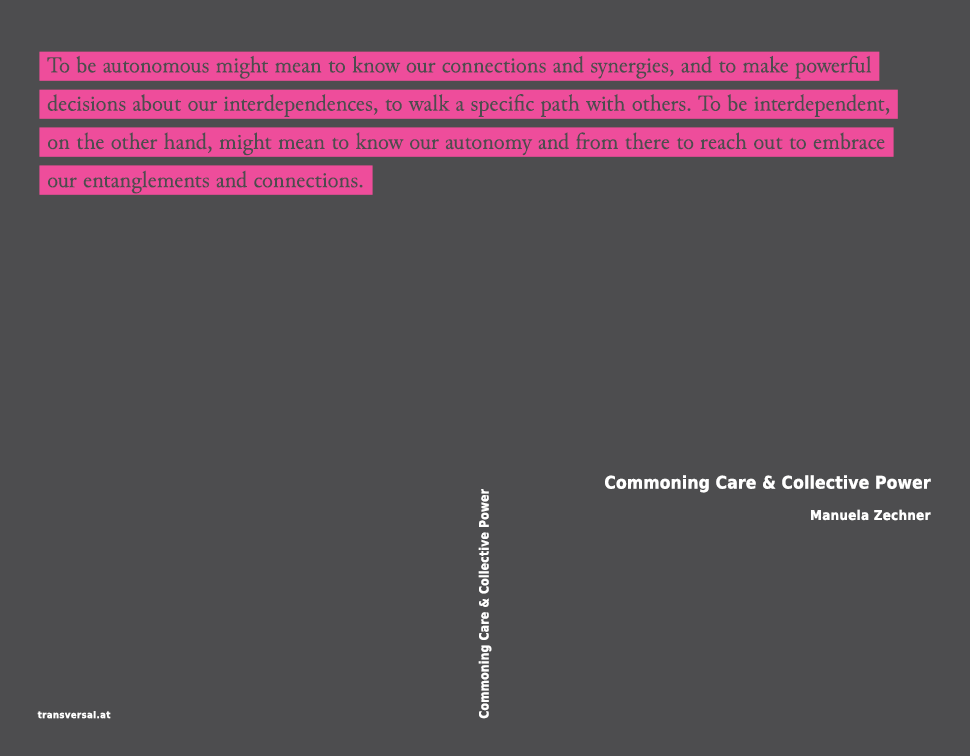 Childcare Commons and the Micropolitics of Municipalism in Barcelona

Commoning Care & Collective Power traces the twin genealogies of childcare commons and the micropolitics of municipalism in Barcelona. It shows how grassroots movements engaged new institutional experiments after Spain’s 15M movement, marked by struggles for social reproduction and a new feminist politics, leading towards commons municipalisms. Interested in both struggles for and to care, this book looks across subjective and collective processes. Interdependence and autonomy, care and micropolitics, building power and commons, neighbourhood and city: those are some of the terms brought into resonant tension. Zechner honours the groundwork of mothers’ networks and commons nurseries, telling of powerful webs and infrastructures of care in the neighbourhood of Poble Sec. Midwives, mothers, carers and councillors prefigure schools and cities of care, as this book turns to explore how institutions are themselves sites of struggles to care. How to stay with the trouble of embodiment, interdependence and collective learning, even within institutional contexts? How might we grapple with the relation between movements and institutions? This book’s interweaving of concepts and experiences traces a powerful cycle of collective learning, yielding new articulations between the commons and the public, and channeling new feminist forces.

Preface: The Conditions of Strategy
by Bue Rübner Hansen

I. Common struggles: from autonomy to interdependence and back again

No commons without community and care

Minor genealogy I: Commons between autonomy and institutions

Minor genealogy III: Power from the streets to the institutions

Municipalism and social movements: Anatomy of a relation

IV. By way of concluding: struggles for care, struggling to care

Both interdependence and autonomy