Casa Invisible is here to stay!

Against the eviction of the Invisible, against Mall-aga, against the compliant city

After two-and-a-half hours marching through the city, the protest took a turn onto Calle Larios, the central avenue of pomp in Málaga’s center, at 10 pm. A wave goodbye to the vehicle carrying the band that had been leading the protest for so long, and the march moves on into the pedestrian zone. Suddenly and with no announcement, the first seven rows of superheroínas invisibles begin to run, not quite such “invisible” superheroines, they overtake the six-man line of police and run the whole way to the Plaza Constitución, where the final rally is supposed to take place. Incompliant flight, breaking through the consumption and movement patterns of the expensive shopping mile, stares of disbelief from passersby and even most of the protest participants are astounded by what is possible on this day. 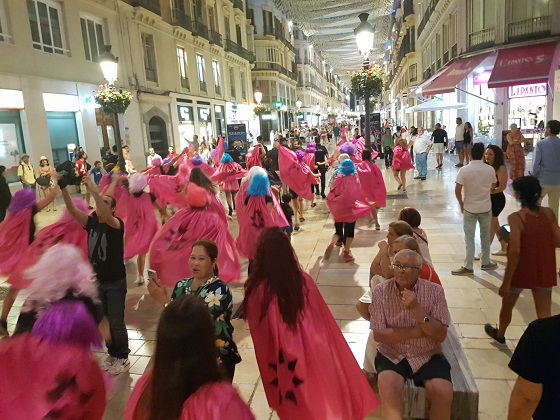 How is this possible in a city that has become more and more beholden to tourism? That caves in to the assignment and handing-over of the city center to speculation, gentrification and touristification? Culture instrumentalized as attraction in the competition amongst cities and as brand in the service of tourism – from the claim to Picasso’s birthplace to the countless museum institutions erected of mediocre quality? How is this possible, above all, in a city that is now also shedding its liberal cloak and attempting to evict the sole remaining sociocultural oasis in the thoroughly-touristified desert of its center?

For over eleven years Casa Invisible has been a guarantor of alternative cultures and ecologies of care, and it has also been a social machine for everything that is incompliant in spite of, and in the middle of, the compliant city: feminist cafes and workshops, antiracist and refugees-welcome groups, concerts, local meetings of the PAH (platform against evictions), meetings of the movement Málaga no se vende and of the Sindicato Inquilinas, discursive events held by the Universidad Libre Experimental (ULEX), dance and theatre workshops, technopolitical initiatives, and much more. The building, occupied in 2007, was built in the 19th century; it has a wonderfully shaded patio and is an island in the middle of the multiply sold-out, instrumentalized and valorized city. Embedded in a somewhat inhospitable environment, the Casa Invisible is instituent practice, a new form of sociocultural institution, multi-generational, transversal and diverse in all directions. 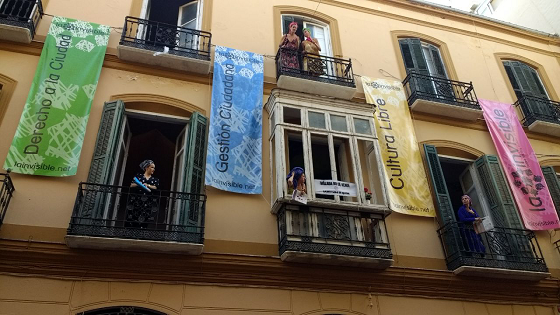 As part of a federal strategy, the right-wing neoliberal party Ciudadanos began to attack social centers across Spain at the beginning of this year, precisely because social centers, thanks to their practice of occupation, break through the extreme economy of appropriation and extraction of the compliant city. It is particularly annoying for the right-wingers that this kind of island against property and speculation exists in many Spanish cities. In Málaga’s case, the Ciudadanos members of the city parliament have been pressuring the longstanding mayor of the Partido Popular to give up his legal “tolerance” of the occupied Invisible and, after eleven years, to call for the building to be evicted due to flimsy administrative reasons.

But the Invisible can’t be evicted just like that. On March 10, 2018, there was an initial colorful protest against the threat of eviction, and even a steady and steadily heavier rainfall was no reason to stop the action or give up the joy of occupying public space. Singing and dancing in the rain, with a fondness for doing so in front of the city hall. 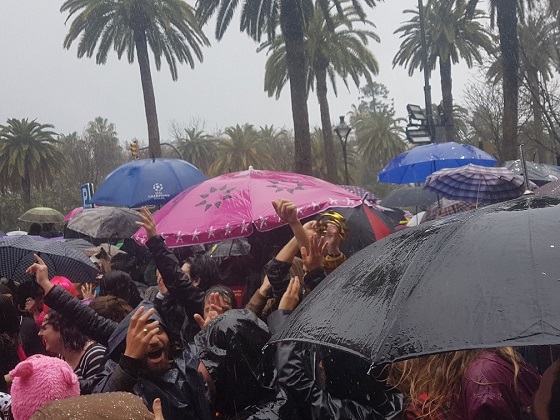 On July 19 a new and apparently more urgent announcement of eviction came from the municipality, and an even larger protest march in support of the Casa Invisible made its way through the city. With slogans such as “La Invisible se queda” (Invisible is here to stay), “somos indesalojables” (we are unevictable), “La Invi no se toca” (No one touches Invi), thousands of people met in front of the social center and took off on a common march through the city. The mayor, Francisco (“Paco” or “Paquito”) de la Torre received special attention on this day, as choruses like these rang out through the streets: “Dónde está Paquito, Paquito dónde está, Paquito está vendiendo lo que queda de la ciudad” (Where is Paquito? Paquito where are you? Paquito is selling off the rest of the city) or “Paco escucha, La Invi está en la lucha” (Listen Paco, Invi is fighting). This struggle is not just a struggle for an occupied building and its users, but also a struggle against the complete appropriation of the city, against a Mall-aga of the muelle uno, which turned the port into a mall, against the compliant superficialities of the consumption of culture and sociality that are extending into all parts of the city center.

But Málaga no se vende – Málaga is not for sale!, as movements against the sale of the city centers have called themselves in Madrid, Barcelona, Valencia, Sevilla and beyond Spain. And: without Casa Invisible, Málaga is no longer anything but a mall, as can be read on a poster of the freaky Guiri satire crew from the Laguinillas neighborhood. 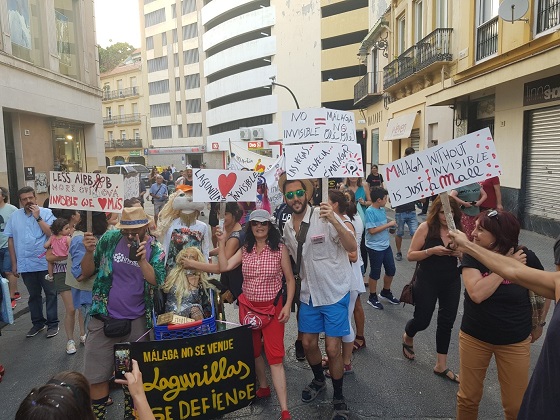 The problematic of the compliant city, which complies with and subjects itself to the demands and orders of the tourism industry, is the backdrop against which the order of eviction for Casa Invisible by Málaga’s city administration is taking place. The wild spread of Air Bnb and tourist apartments, and the gastronomification of the smallest remaining square meter of the city center make up one side of this backdrop; the continued construction of a zombie museum landscape determined by tourism is the other side. Instead of supporting sociocultural centers like Invisible, the city tries to make its life difficult or even impossible. It’s no surprise that the protest on July 19 needed to make a stop in front of the city hall… 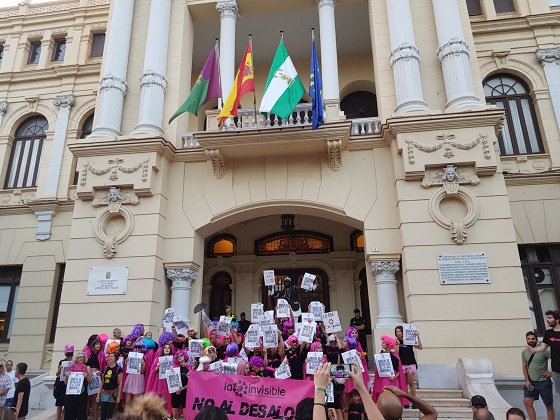 At the entrance of the city hall, the invisible heroines of the pink block proudly hold Invisible’s eviction notice up for the camera, to then tear it apart. And this can be understood not least as the implicit announcement that the threat of eviction can also be reversed. 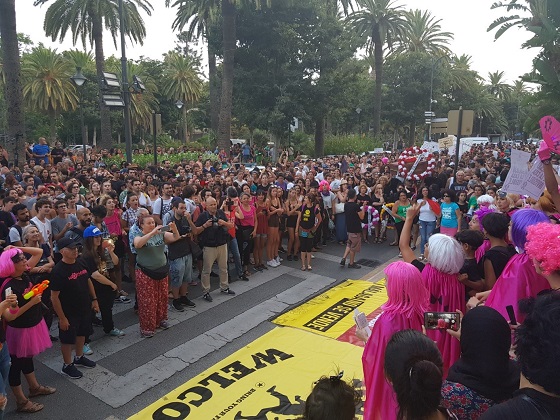 The mayor will have to assume that the eviction will not remain invisible and unheard in the classic summertime abyss of August vacation time, and that instead, the discussion and reporting on the city’s way of dealing with incompliance, such as that of Invisible, will extend into the liberal mainstream – whom he has to thank for his tenure in city hall – and into everyday conversations in neighborhoods across the city, all the way into the bourgeois spaces between the Plaza Merced and Calle Larios. 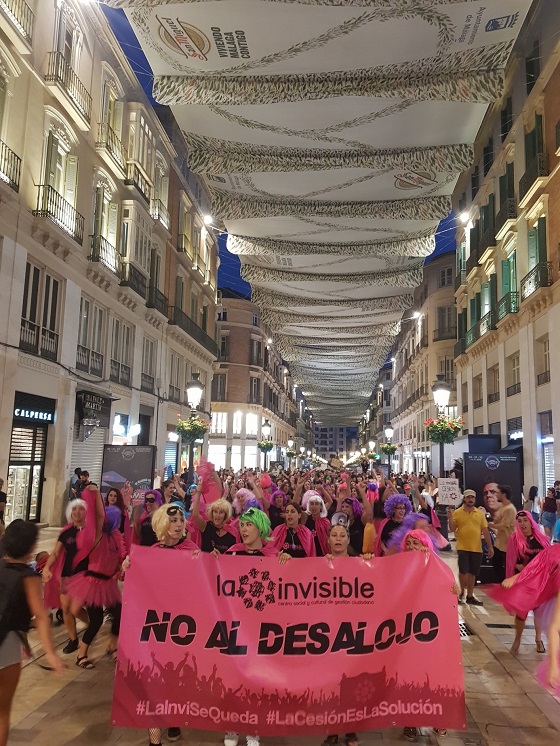 “No al desalojo!” – No to eviction! After the invisible heroines’ sprint through the shopping street, darkness falls and the march reunites and moves towards the main plaza, Plaza de la Constitución. This is the site of the final rally, and here, the numerousness and diversity of the participants becomes visible. Once again, the power of invention, the potency of urbanity, the ecology of care has shown itself, appearing in the march, in countless performative actions and visual representations as an affirmation of incompliance: often invisible in everyday life, but always already there, in the ungovernable pores of the surround, before and before the compliant city.

And as a final act the Invisible’s Manifesto is read aloud:

“A few days ago we received notification from the Municipality demanding the eviction of La Casa Invisible. It gives fifteen days to vacate that which has been built over eleven years of collective strength; fifteen days’ countdown to continue expanding its homogeneity, but we will not allow it.

They want to eliminate any glimpse of light, this and nothing else is what they want, because life is unforeseeable, spontaneous; where it is least expected, a plant appears, opening itself in the middle of the cement, opening cracks. Here the Invisible grew during these eleven years, against all things prognostic, planting its roots in the city, reclaiming with each step a life that is worthy of being lived. And this is what tarnishes their cement paradise.

It bothers them and they want to censure all things that cannot be controlled or predicted, all that which escapes their exclusively monetary interests, so for them culture is capital, and under the law of the market that which cannot be sold should not exist. They want a flat culture, without nuances or edges, of a postal and souvenir type, easily reproducible, classifiable, sellable. This is hwy they try to invent folklores, new traditions with which they saturate the streets every day after another, depreciating the everyday life of the people with impunity, a people that does not need any kind of extras.

While La Invisible was learning to relate to its surround, to understand that its struggle was not exclusive, but rather connected by every pore to the claims being made by neighbors who also see that every ounce of non-marketable life is being robbed and who are being pushed out to where they cannot be a nuisance, La Invisible became more and more discomforting to the municipal government and its caretakers. Thus… they started to TELL LIES!!!, to divert the conflict so that they wouldn’t need to confront it, to negate the existence of reached agreements, attempting to choke a project that they are incapable of understanding. But they have tricked no one: they are the fools used by an industry that dehumanizes us and conceives of us as slaves, submissive and exhausted by interminable days; without projects, suffocating from terrible wages, without time to devote to anything beyond production and consumption. Because this is how their image of the city wouldn’t become clouded, wouldn’t capture the tourists’ cameras. But we, the invisible, can be obscured, and they don’t want to see us.

They want to make us disappear and with every attempt, we become more!

La Invisible is all and each and every one of us. We are those who are here today and those who continue coming day by day. We are those who they do not want. We are a common. And we are going to demonstrate that we are, moreover, UNEVICTABLE! 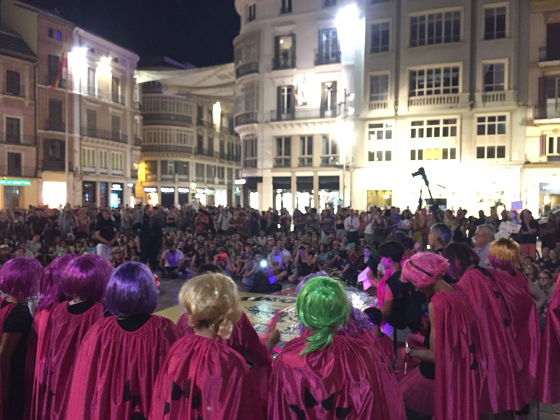 Thanks to all the activists and the ecology of Casa Invisible, and a special thank you to Kike España for providing material and discussing and co-interpreting all the signs and movements in the in/visible protest.